Our beer is dispensed by Keykeg, those curious objects you can see underneath our taps. 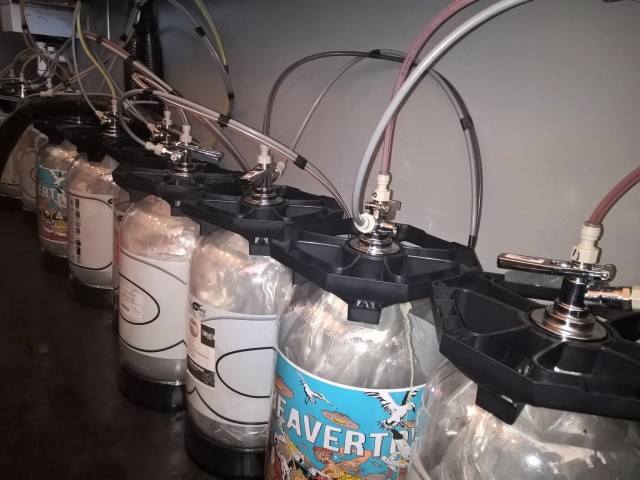 Keykegs are effectively a sterile bag containing beer inside a rigid plastic container. The gas (CO2 in our case) pressurises the container between the plastic wall and the bag. This gas never has any contact with the beer itself, and because the bag is squeezed empty by the pressure as the beer is poured, the beer is not exposed to air either (unlike with cask ale, where the beer is replaced by air as the rigid cask empties).

This means the beer can be kept fresher for considerably longer with Keykeg beer than with traditional keg or cask. Depending on the style and alcohol content of the beer, this could be weeks or months rather than days with cask. With Keykegs the beer does not degrade so the first pint is as good as the last.

We like our Keykegs to be on display for our beer drinkers, and because the keg itself does not need to be kept cold or in a cellar, we are able to do that. The beer is fed from the keg to a chiller, chilled in the lines, and then pulled out of the taps. Once emptied, the Keykeg is depressurised squashed and disposed/recycled, unlike casks which need to be transported, washed and repatriated to the brewery.

We have been working very closely with Time & Tide Brewing on our Keykeg install, and when we asked them why they chose Keykeg as the main dipsense system for their products their answer was “it’s what’s best for the beer”.